Hydrogen has been mainly used for industrial gas and rocket fuel, but it has attracted attention as a fuel for fuel cell vehicles (FCVs) and household stationary fuel cell systems (ENEFARM) with the development and spread of fuel cells.

Since around 1980, we have been developing fuel cell and hydrogen related products using our own hydrogen combustion technology, heat utilization technology and reaction control technology. In 1983, we developed a hydrogen generator for a 70 kw class phosphoric acid fuel cell and a small afterburner for Enefarm. In fiscal 2013, we will be the first large-scale plant, IS process and continuous hydrogen production test facility. Completed. Based on these technologies and results, we are currently working on the development and demonstration of hydrogen production equipment for hydrogen stations, which is essential for the spread of fuel cell vehicles (FCVs). 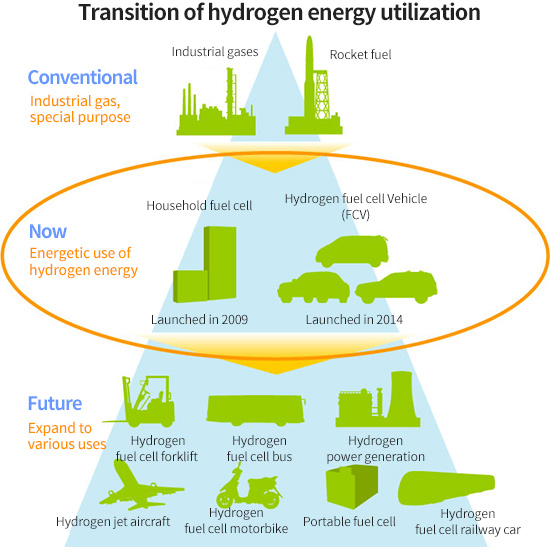 Most of the energy we use is from petroleum, which is easily processed using natural energy such as crude oil, gas and coal, and secondary energy such as city gas and electricity. The most convenient secondary energy is electricity, but electricity has the major disadvantage of being difficult to store. In addition, gasoline and natural gas have problems such as the emission of CO 2 and the depletion of fossil fuels , which cause global warming .

A fuel cell vehicle (FCV) is an electric vehicle (FC) compared to an electric vehicle (EV) driven by electricity generated using natural gas as an energy source and a fuel cell vehicle (FCV) driven by hydrogen obtained by reforming natural gas. Energy efficiency is expected to be about 1.3 times that of EV. With the development of fuel cell technology, hydrogen energy is attracting attention as an alternative to fossil fuel-derived secondary energy.

Hydrogen is the third most abundant element on earth, but in the state of molecular hydrogen there is no place to be produced directly in nature to the extent that it is slightly present. Therefore, hydrogen is manufactured by steam reforming of coal and natural gas and used as industrial materials and rocket fuel, but hydrogen as secondary energy that can be manufactured from various types of energy is attracting attention. 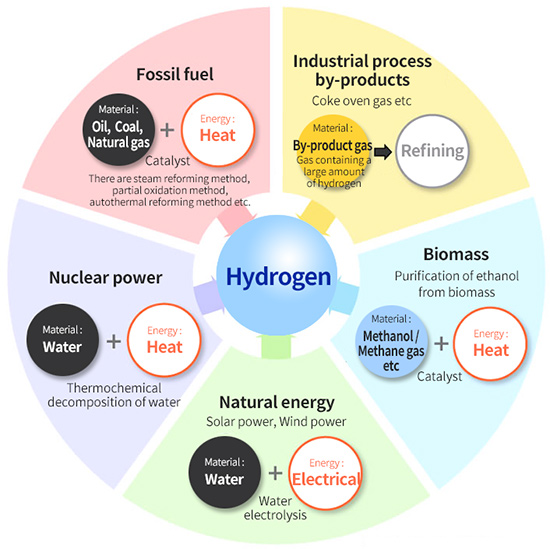 Hydrogen can produce hydrogen by electrolysis of water as well as fossil fuel reforming and by-products of industrial processes, as well as surplus electricity generated from biogas, solar light and wind power. In addition, technology has also been developed to generate hydrogen in large quantities by directly decomposing water from thermochemical reactions using solar heat and nuclear heat. The ability to convert various energy into hydrogen in this way can increase the usage efficiency of all energy. In the future, it is also important to note that by adding a CO2 recovery process to the reforming of fossil fuels, it is possible to create an energy with less impact on the natural environment.

On the other hand, the off-site station is a system that uses various energy to produce hydrogen with a large-scale hydrogen generator and carries high-pressure hydrogen to a hydrogen station with a special tank truck. Depending on the environment and space where the hydrogen station is installed, a system will be adopted that takes advantage of the features of each system. Emissions and exhaustion of fossil fuels.

Hydrogen energy technology, which is expected as a technology to support future energy systems, has shown a brilliant development led by fuel cell technology, but there are issues to be solved for the further spread of hydrogen energy and the realization of a hydrogen society Many are left.

According to the country’s hydrogen and fuel cell strategy roadmap, fuel cell vehicles (FCVs) will be introduced to around 40,000 by 2020, around 200,000 by 2025, and around 300,000 by 2030 It has been with. The number of hydrogen stations to support it is 160 by fiscal 2020 and 320 by fiscal 2015, and it is said that the hydrogen station business will be self-sustaining by the late 2020s.
In order to achieve this goal, it is necessary to further reduce the station construction cost. We aim to lower the cost of hydrogen production equipment at the city gas reforming type on-site hydrogen station and optimize the hydrogen generator PSA to simultaneously improve the energy efficiency of the hydrogen station and reduce the construction cost at the same time We have succeeded in developing technology to achieve.
In the future, we will develop our technology to lower the cost of on-site stations that use LPG as a raw material, and contribute to the cost reduction of petroleum-based fuel reformer-type on-site hydrogen stations.

Our approach to hydrogen energy, examples

We are developing ultra-compact, high-performance combustors as reformer combustors installed in Enefarm.

At present, for on-site hydrogen station hydrogen production equipment, development is under way to reduce the cost of the equipment to 50 million yen or less in order to spread FCV scheduled from fiscal 2015. However, in the conventional hydrogen production apparatus, it is considered that further technical development is necessary to achieve the price target because of the large number of instruments constituting the apparatus.