Our approach to hydrogen energy, examples

In the development of a reformer for household fuel cell systems, we developed a 1 kw class PEFC reformer in collaboration with a university, and at that time developed the world’s smallest class combined reformer. 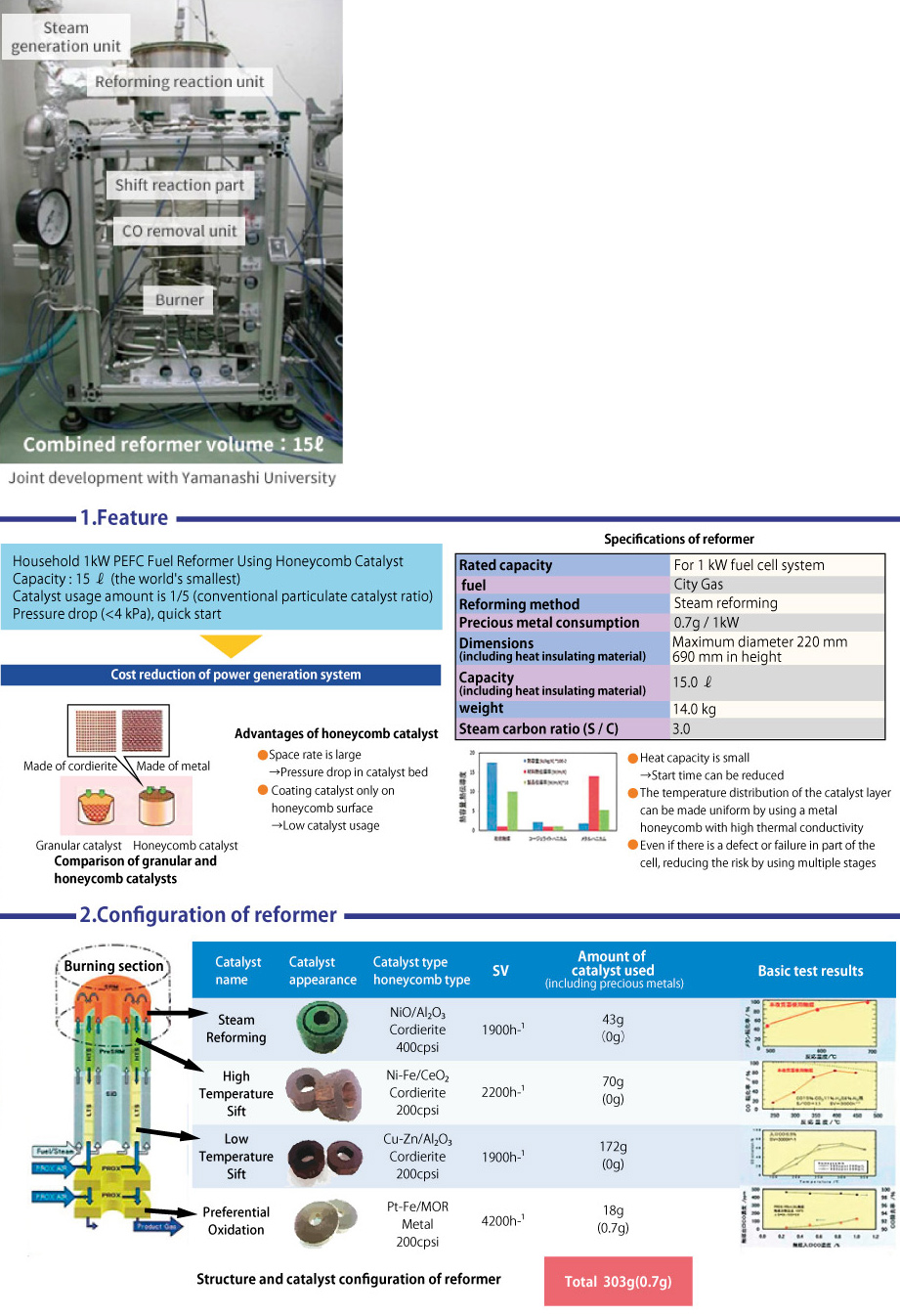 Principle of
IS process The IS process is a chemical process that decomposes water by combining three thermochemical reactions using compounds of iodine (I) and sulfur (S). Hydrogen and oxygen are produced by the decomposition of sulfuric acid and hydrogen iodide using the heat of 300 to 900 ° C supplied from the high temperature gas furnace. A major feature is the closed cycleability, in which reactive substances such as iodine and sulfuric acid other than water are repeatedly used in the process. ([Source] (National Institute of Advanced Industrial Science and Technology) Japan Atomic Energy Agency)

At AIST, in order to realize the synthesis of ammonia (re-energy ammonia) from hydrogen (re-energy hydrogen) produced using renewable energy, it overcomes the problem specific to ruthenium catalyst, which lowers its performance with increasing pressure And created a new catalyst capable of maintaining high activity in a pressure range of 10 MPa (about 100 atm) or less. The process developed by JGC Corporation using this catalyst makes it possible to produce ammonia from re-energized hydrogen with variable supply amount, and a demonstration test device equipped with this catalyst has been constructed at the Fukushima Renewable Energy Research Institute. The demonstration test started in earnest. Ammonia is expected as an energy carrier because it is useful as a hydrogen storage material and can be transported in large quantities, and furthermore, ammonia itself is used as a fuel that does not emit carbon dioxide (CO2 ) at the time of combustion . ([Source] (Country) National Institute of Advanced Industrial Science and Technology)

In the fiscal 2018 and 2019, we are promoting the production and storage of re-generated electrolytic hydrogen and the supply and utilization of hydrogen mixed gas of the Ministry of the Environment. It mixes hydrogen from LPG reforming and water electrolysis equipment to produce gas with heat equivalent to city gas. The manufactured gas is sent to a simulated house and burned with commercially available gas appliances.

Outline of Demonstration Project
Produces hydrogen by wind power generation and mixes it with gas close to city gas. The mixed gas is supplied by gas piping to a use site installed at an adjacent site, and a hydrogen mixed gas is actually used in a commercial gas apparatus.

At present, for on-site hydrogen station hydrogen production equipment, development is under way to reduce the cost of the equipment to 50 million yen or less in order to spread FCV scheduled from fiscal 2015. However, in the conventional hydrogen production apparatus, it is considered that further technical development is necessary to achieve the price target because of the large number of instruments constituting the apparatus.

Type and structure of combined reformer 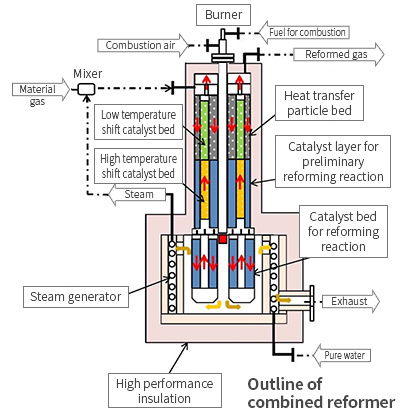